I did a little scrappy shopping over Labor Day Weekend.

My favorite find is the Webster’s Pages “Dream in Color” enamel dots. This is one of those times when seeing something in person clinches the sale. If I had seen these on Amazon 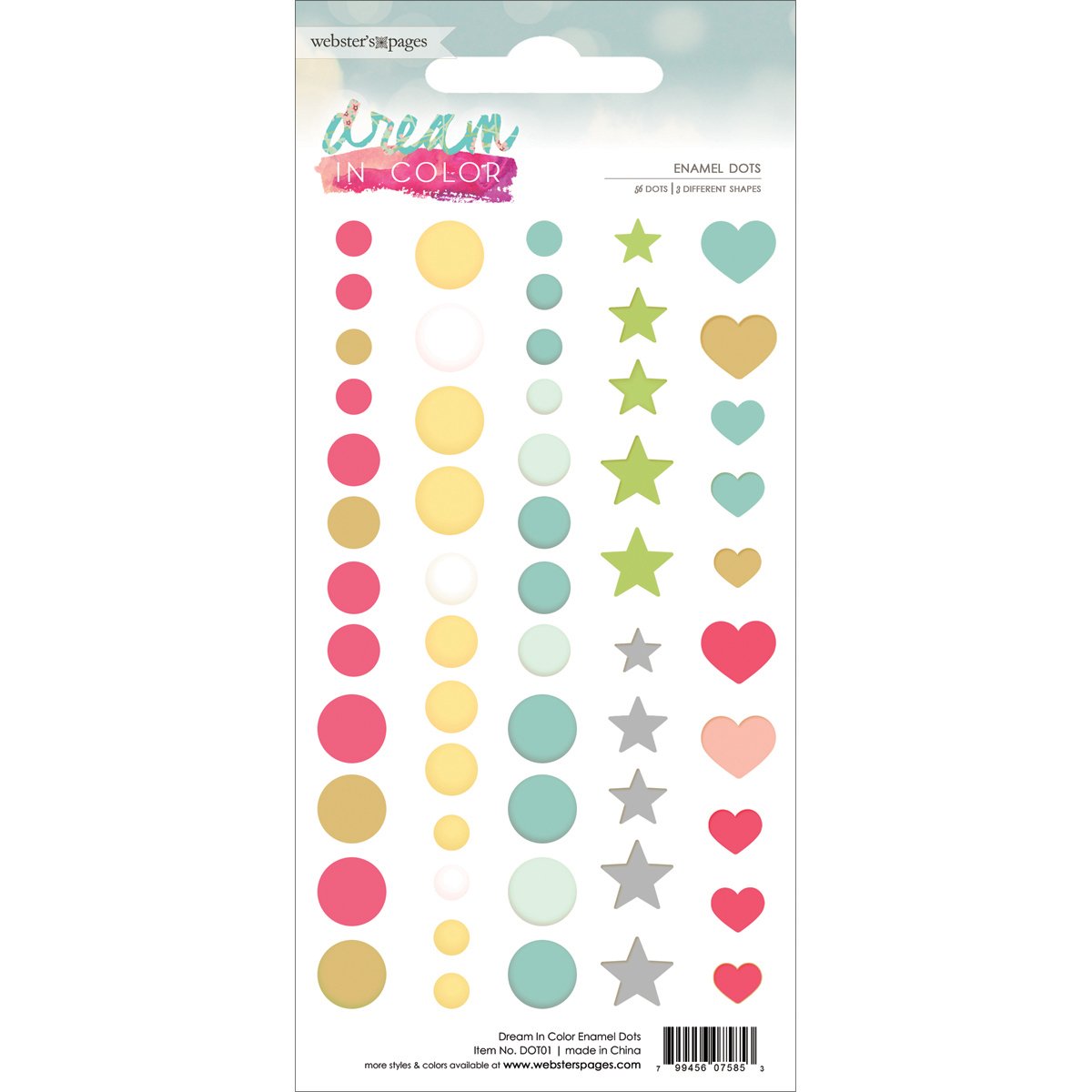 . . . they wouldn’t really have caught my eye. But in person, they are sooooo cute! Granted, those glittery gold dots will probably end up in the trash; I am SO over gold. I mean, I was never ON it but I’m so OVER it. There’s just no love for silver and I don’t get it.

Anyhow, I got those beauties at Beverly’s Crafts and paid full price. I had already used a coupon in the transaction – to get 3 WRMK 12×12 albums for the price of 2. What, WHUUUUTTT? That made them only $20 each instead of $30 so I was okay paying full price for some dots :) But you KNOW I tried to use another coupon. Foiled again!

The other 2 items were from Michaels and they weren’t on sale but I got a little discount on ’em. The cashier entered the coupon for 20% of my total purchase, so that was awesome.

I already have a set of the blue and green dots but those are colors I scrap a lot with. And the Heidi Swapp

“Puffy Stickers” are super cute. I just adore her handwriting. She could write “Parcheesi” or “Batmobile” and I would buy them, even though I will never scrapbook a thing on those topics.

More to come on some Project Life

stuff I bought . . . will be selling off some of it, if you’re interested!

Have a great day 🔆

Scrapbook Shopping: So I Finally Got to Shop at Joann’s and ….

As you may have heard me complain about before {ahem}, I live near very little scrapbook shopping. Within 1 hour of me, there is a MICHAELS and then whatever I can find once in a while at TUESDAY MORNING, TARGET, WALMART, and ROSS. The best scrapbook shopping I have is a BEVERLY’s CRAFTS 40 minutes away so I get there about once a month if I’m lucky. I did recently find a new little LSS about an hour away so that’s cool at least but, again, only a once-in-a-while thing.

What I’m tryin’ to tell ya’ is that I’m scrappy shopping deprived, people!! {Which is one of the reasons I become a MEMORY WORKS consultant several years ago, when we went from 7 LSS’s within an hour down to one and then NONE}.

So when I was recently out of town ~ a town with a Joann’s ~ pardon me for being a bit twitterpated about it ;) On the scrapbook message boards and from friends in other states, I hear about Joann’s this and Joann’s that. I’ve been to a Joann’s on various other trips and always found that a decent amount of scrapbook papers and embellishments had jumped into my cart and forced me to buy them.

I’m also familiar with JOANN.COM and occasionally shop online in that huge-amous store. They have coupons!!! Yeah, I like me some Joann.com + coupons. I have snapped up some OCTOBER AFTERNOON collection packs for 40% off and plenty o’ WRMK 12×12 D-ring albums for 1/2 off and free shipping. I mean, it just don’t get much better than that.

But I have to say my recent trip to the brick-and-mortar Joann’s was quite, quite disappointing :(

There were 4 kinda’ short aisles of scrapbooking stuff. Most of it I’ve already seen at Michaels. Or it’s already been in my stash. For years. Okay, maybe not YEARS but, like, for a WHILE. Jeez.

All the open stock 12×12 papers were boring and/or old. The paper pads were meh, nothing from any of the popular brands I like, nothing stark-raving new. It was all so boring, I can’t even really remember what there was.

The only thing I was even tempted to buy was an issue of ARTFUL BLOGGING because it had a feature on scrapbooker REBECCA COOPER, who I’ve always liked.

But I didn’t because at that point I was in “man, I’m so disappointed in this store so you can bite me” mode. {Sorry, I get that way sometimes … when you get me all built up and then dash my hopes}. Joann, can we talk?!?! If your scrapbooking section is going to be THAT lame, why even have one? Just let it go and get some more BEADS or something, mmm kay??? I might as well have been at Walmart 15 minutes and one less tank of gas from my house.

So I left Joann’s empty-frickin’-handed. Totally harshed my mellow, dude. The 8 papers on the left were in the bargain bin, 3 for $1. I paid full price for the ECHO PARK birthday paper. I like how you can cut it apart and make use of it on several pages. I used a 40% off coupon on the burlap Thickers … so stinkin’ cute.

Left the store for about $7. Just enough shopping therapy to make my day :) What’s the last good deal you got? Yep, I was in BEVERLY’S CRAFTS the other day, turned the corner into the letter sticker aisle, and saw this sign shining at me like a beacon in the night. Suh-weet!

For your viewing pleasure, here are some iPhone photos of all the Thickers that were available at my store … Here are the packs I bought …

These are for a prizes for an online crop … I don’t usually do the glitter ones myself, but these turquoise ones are so pretty and sparkly! Photos don’t do them justice, do they? The pink and bluish-grey ones were new to me; they have a pearlized surface to them. Very purdy. The two black sets are foiled chipboard so they have a subtle shine to them. I love the round font on the right – it’s great for kid and school pages.

The green ones in the aren’t my favorite font ever, but they’re such a pretty shade of green and they are FLOCKED. Super cute. I think I have the Letterman Thickers in almost every color now. They are AWESOME for sports pages; also for school layouts. I was in ROSS that day, too. {What? It’s not my fault … It’s right next door! My feet just walked me over there against my will …} Here’s some Best Occasions, which is the brand Walmart sells, and some MY MINDS EYE “BOHEMIA” if you missed out on the Bohemia stack at Costco a long time back. It is gorgeous and versatile paper. I still use it quite a bit. I thought this one was really pretty … love the spring and summer colors. You’ll be surprised to hear this, but I was a Good Girl and didn’t buy any of these. Tempting, though. Very tempting.

Have I tempted you to check out Beverly’s or Ross? Ha.