What a neat ARTICLE! It’s about a new scrapbook-related book called “Writing with Scissors: American Scrapbooks from the Civil War to the Harlem Renaissance.” by Ellen Gruber Garvey. 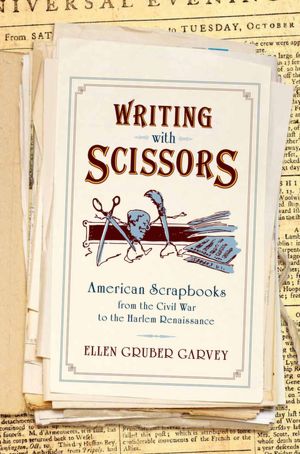 Scrapbooks: The Facebook of the 1800s
BY DAWN BAUMGARTNER VAUGHAN

DURHAM – Before Pinterest, before Facebook and before blogs, there was scrapbooking. Not the scrapbooking as sport that some domestic fanatics take on, with store-bought accoutrements. Scrapbooking with scraps of newspapers. In the 19th century, newspapers were cheap, abundant and disposable – and considered valuable, Ellen Gruber Garvey said during a talk about strategic scrapbooking Monday in the Rare Book Room of Rubenstein Library at Duke University.

Some people made scrapbooks with much enthusiasm, filling hundreds with newspaper clippings. What they chose to cut and paste, and how they repackaged that information, remade it, Garvey explained. An English professor at the New Jersey City University, she is the author of “Writing with Scissors: American Scrapbooks from the Civil War to the Harlem Renaissance,” just published by Oxford University Press.

Scrapbooking in the 19th century was a democratic practice, Garvey said, and people of all classes kept them. “It required very little money,” she said, and most people pasted clippings into repurposed ledgers or agricultural reports. Mark Twain, however, did invent a self-pasting scrapbook. Some people kept scrapbooks of themselves in the news, like Abraham Lincoln, public speakers and actors. For others, like those who saved newspapers from 9/11 or the election of President Barack Obama, it was about “living through momentous times and keeping a record of it.”

Scrapbooks aren’t always appreciated by libraries, Garvey said, and they’re hard to preserve. They’re like the ancestors to Internet bookmarks, she said. But in “Writing with Scissors,” she includes information from two scrapbooks in the libraries of Duke University and UNC. Duke has a scrapbook by the Solomons family of Savannah, Ga., which was made during the Civil War from 1861-63 in a used ledger from the family business. Clippings from the same battle are pasted again and again of a Confederate victory. The types of clippings chosen show the attitude of the person making it.

“She chooses. She doesn’t take everything she sees,” Garvey said. “It’s her life, circulated and filtered through her ideas, through the newspaper.”

White newspapers of the time assumed its readers were white as well, and shared views on lynchings, black voter oppression and the like, even after the war. Frederick Douglass first found the meaning of “abolitionist” in a pro-slavery newspaper, she said. Black scrapbooking was a way of speaking back to scrapbooks like Solomons’.

“They write with scissors,” Garvey said. Black scrapbooks were used to analyze media with juxtaposition, as written commentary and as black history, she said. North Carolinian Charles Hunter, an African-American teacher, writer and principal in the 1800s, used his scrapbook to compare newspaper clippings of similar criminal accusations, with the black people punished and white people freed. The clippings were pasted near each other. Using the language of juxtaposition is the basic grammar of scrapbooks, Garvey said.

William Dorsey, an African-American historian in Philadelphia, made 400 scrapbooks. Once, called “Colored Centenarians,” was full of clippings of African-Americans who lived more than 100 years.

“Dorsey created a black history out of the hostile white press,” Garvey said.

Compared to the present day, scrapbooking was very much like reading and saving at the same time, like Facebook, she said. “In many respects, it was similar to LexisNexis – a way of sorting material.”

“Writing with Scissors” is available for Kindle.

Some thoughts after reading the article:

1. ” . . . the scrapbooking as sport that some domestic fanatics take on, with store-bought accoutrements . . . ” is yet another slam on scrapbookers. But I guess we should be used to those by now (eye roll). First of all, if scrapbooking was a sport, wouldn’t I have lost weight by now? And B., I’m the furthest thing from a domestic fanatic you will ever meet {just ask my husband and kids . . . wait, I think they’re under a pile of laundry here somewhere . . . }, but I am a kick-azz scrapbooker. So . . . just . . . NANNER!

2. I love that scrapbooking was more popular with a variety of people, even MEN (!), back then. And that you could tell what was important to them by what articles and clippings they chose to scrapbook. I’ve never thought of it that way but can’t we say the same today? My scrapbooks are predominantly filled with layouts of my kids, extended family, sports, and trips. And yes, those are the most important things in my life at this stage.

3. The African-American and women’s rights aspect is fascinating. How cool that they were able to kind of circumvent the popular press, make their own histories, and highlight what was important to them. This reminds me of the blogging, Twitter, etc. of today: WE the people choose what to post, which articles to Tweet, what is important to us regardless of what the popular media tells us to care about.

POWER TO THE PEOPLE! SCRAPBOOK! HOO-RAH!

{In a million years, I could never have foreseen that I’d write the above line in my lifetime}.

What did you think of the article?