I’m slowly making progress on the big overhaul of my scrapbook room. If you’re not caught up, you can read the PROLOGUE and PART ONE, if you like :) But the Prologue is important reading; it’s where I tell you what happens if you make a smart ass comment about how much crap….erm, STUFF I have. Yes, I have a lot of paper. No, you can’t shop here. Yes, I have a life. Blah blah blah….

So, I’ve done lots of furniture moving. This is going to take awhile, so get comfy…

1. Unloaded everything from the desk – underneath, off the top, and in the drawers – and moved it about 2 feet closer to the sliding glass door. I didn’t repack the office supply and computer-related stuff I had in the desk cupboards; need to find a new home for all that. It’s in a pile here somewhere…

3. Emptied out the legal filing cabinet, moved it from a back wall to align with one edge of the L-shaped desk, and refilled it with the same stuff I had in there before, which are greeting cards, school supplies, and more home office stuff. I gathered scrap magazines and idea books from various places around the house and piled ’em up. 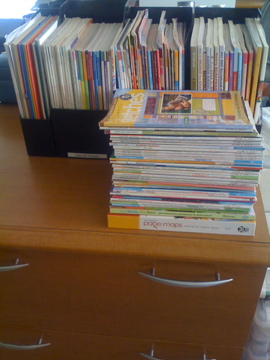 As you can see, it’s time to purge these again. I usually do this about once a year but, yeah, it’s been awhile. A friend that I scrap with recently finished her project of pulling pages and ideas from her magazines and organizing them into page protectors in a binder. I’m so jealous….it was great! So I’m deciding now if I have the time, patience, and devotion to do the same thing. Purge or make “the perfect idea binder,” THAT is the question.

As for all those idea books….I don’t think I’ve EVER gotten rid of an idea book. Something about throwing away a book that I paid $15 to $40 for is much harder than a $5 magazine. But I should look through all my idea books and maybe toss some older ones. I’ll bet I don’t even “scrap like that anymore” for some of them, huh?

4. Moved the table that I’d been using for scrappy stuff (okay, to dump things on…) over to the area by the storage cubes. This will be the famous Homework Table.

5. Moved the couch and coffee table from in front of the desk to behind the desk by the back window. The original plan was to put it flush against the wall and lined up directly under the window (I’m all about symmetry, baby!). But once I got it there, the couch seemed kind of squished over into the corner and the coffee table was somewhat blocking the walkway to the back part of the room. So I tried the couch at an angle, and I liked it. Bonus: It creates a hidey space behind it for ugly stuff, lol. And I felt so “HGTV” about it, too. 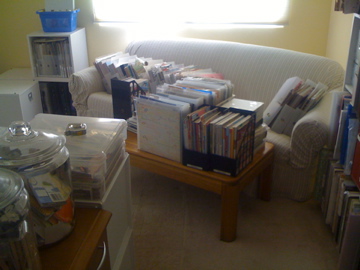 6. Unloaded just about everything from 10 Store in Style cubes (see couch pic above), moved the cubes to the opposite end of the room, and reloaded them pretty much the same way. The SIS cubes are now on the wall that the oak TV cabinet used to be on. This is the area I talked about where I have to keep a walkway to get to the slider, so the cubes are a good thing to put here. They fit nicely and I can stack more on top someday if need be (God forbid!).

I first thought about configuring them like this, with a kind of “turn the corner” at one end…. 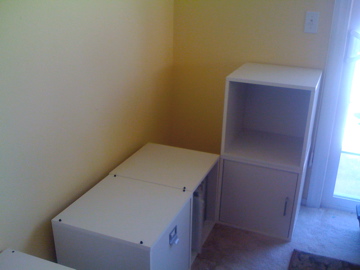 …but decided not to. The positives were that it would be a little different-looking, and it would create a handy little empty space back there in the corner to store crop totes or something. But the negatives were that it made the walking path a bit too slim, and put the cubes right next to the cord for the blinds. And when I put embellishment jars on top of the one by the door, they would block the light switch. No super big deal, but I just decided to go with putting them all flush against the wall, like this… 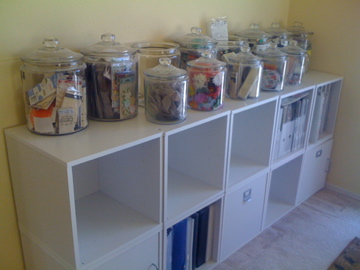 All this furniture moving happened way back on 9/10 (it’s now 9/27!), so when I say “making slow progress,” I’m not exaggerating. It took me awhile to remember and write all this down, the order I did things in. It was quite the feat of engineering to move things AROUND the room while still having everything IN the room. I apologize for any dark photos but most of my madness occurs late at night after everyone has gone to bed. Man, you should’ve seen the wide eyes of my husband and kids when they came out the morning after all this! They were like, “You moved ALL that by yourself!?!? The couch???” and I’m all, like, “Desperate organizers take desperate measures.” (Like, totally…I did all that “like” stuff just to annoy you). Then the daytime photos are overly bright because of the sun coming in all the windows, so I can’t win, lol.

Once the furniture was in place, I’ve just been slowly putting things away, whether within this room or the other parts of the house where they belong, and below is what the room looks like as of today.

Down there is the new back half of the room, with my cool slanty couch, and my corner of chaos. The couch was my dad’s before he passed away so it’s sentimental. Luckily, it’s also functional so I have an excuse to keep it always and forever. That big tub is all the paperwork from my two scrapbook businesses, MEMORY WORKS and Calla Memories. I can get rid of most of it. I just need to go through it and save some paperwork for tax records and such.

The white shelving unit has all my mini album stuff – supplies and some completed albums – but I want to get rid of that shelf and find another way to store my mini album kingdom. That’s actually a shoe shelf so I’m hoping to then move it into my closet and use for, oh, I don’t know…..SHOES???

The basket on top of the white shelves contains letter stickers, which were all nicely sorted by color at one time, and easy to thumb through when I scrapped. Then….I discovered THICKERS. Dun dun dun dunnnnnnnn! I use Thickers lots and I buy Thickers lots. I have a Thicker addiction and I hope there ain’t no cure! But, yeah, I need to go through that basket and purge some old alphas I’ll never use. Like the first major set I bought oh so many years ago, of punch out alphas (I think they were by COLORBOK) in every color and pattern known to man (including plaid and leopard!), in a bubble font, a lollipop font, etc. Eek. Perfect for the kids to use on school projects but NOT for my scrapbooks).

The black boxes are POWER SORT BOXES from CREATIVE MEMORIES and that’s where most of my printed photos are. But photo and memorabilia organization is an ever-changing and never-ending project/battle for me. I’m not even gonna’ GO there right now. The white cubes they’re in are ITSO brand from TARGET. As you can see, I had more photo boxes than Itso cubes, so I bought another Itso from Target when they were on sale recently. (If I remember right, I paid $12 instead of $20). You can see it on my desk in the next photo. 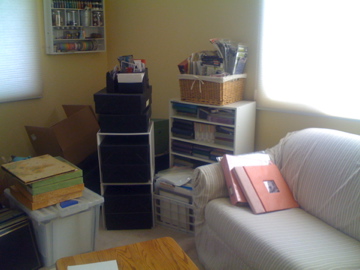 Below is my mess of a desk, and my flooded floor (flooded with scrap crap, that is). There’s the new Itso cube, and one of my new 3-drawer JET MAX cubes. Actually, “new” is relative since I’ve collected 3 of these units over time from MICHAELS using 50% off coupons. I’ve just never put them together, knowing I had this big re-org project coming up. Recently I assembled one and, man, are they a pain in the asset! Don’t get me started. If you’ve put these together, you know what I mean. (I feel sorry for THIS poor scrapper!) I’m dreading the assembly of the remaining 2 but I shall do it, I shall. 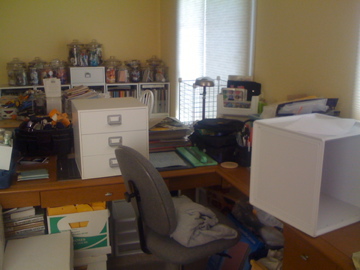 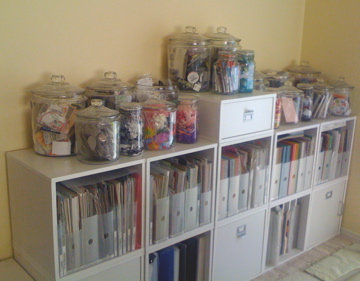 The cubes themselves were already pretty organized before I started this crazy project, as they contain the staples of my scrapbook world: Bazzill cardstock sorted by color, die cut/shaped papers, extra page protectors, scrapbook projects, etc. Most of the vertical files by CROPPER HOPPER are sorted by manufacturer and include patterned paper and all embellishments from that company. They could use some tidying but for the most part, the vertical files are good as they are. The gingerbread jars on top, however, are another story. When I first got them way back when on Craigslist (read about it HERE), I had them organized pretty well, but over time I lost control and just started throwing new things in with no rhyme or reason. I’m going to do a post soon about using 2 of the jars for my chipboard letters. There’s one full of flowers, and the rest I plan to use for random embellishments by color. I also put my ribbon jars back on my cubes…ribbons are sorted by color. I love my cubes and jars…they’re my favorite part of my scrapbook room. Can’t wait til I get this part totally done! My pretties, LOL…

So, that’s where I’m at for now. Thanks for sticking with me. I promise I’ll get done eventually, but real life has to come first, so it’ll continue to be slow progress. But progress is progress, right?