Many of you scrappers are already the proud owners of the “Big Red” ATG adhesive gun, right? 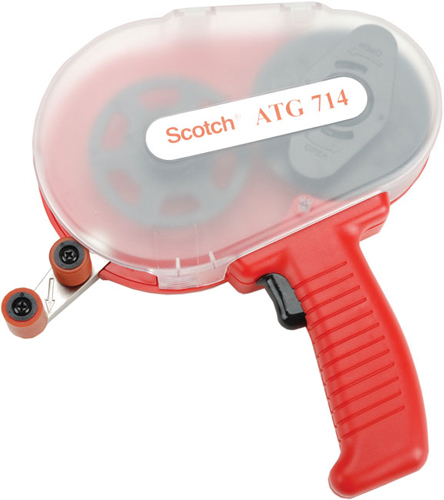 I’ve been hearing talk of these honkin’ big thangs for at least a couple of years now. I never bought one because for one, they were too expensive ($60-ish plus shipping) and two, I was happy with my longtime adhesive (Herma Vario tabs) which I could get at MICHAELS using a 40% off coupon whenever I ran out. 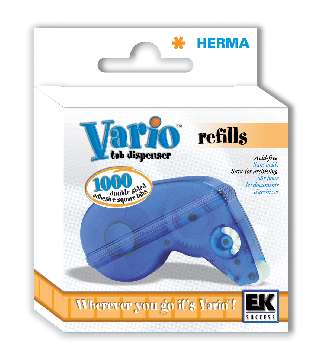 However, I’ve always heard how cool the red ATG was and that if you use one, you’ll want one. Fast forward to Summer 2010, and 3M/Scotch came out with a sleeker version of the ATG … and it’s PINK! Apparently, the original red ATG was made back in the day for art and photo framers (do I have that right?) so the fact that it was bulky didn’t really matter. However, once scrappers got wind of this amazing adhesive tool, there was a need for a smaller, easier to handle version.

I first heard about it on the message boards, of course, in posts like THIS and THIS and THIS. Check this out: If you do a Search for the last 3 months on the General Scrappin’ forum at 2peas, you get over 40 threads mentioning “ATG” in the title. Amazing! Talk about a Frenzy Item!

Through all this talk, I never intended to buy one. Well, not really. I mean, I considered it then talked myself back out of it. Once I heard it was going to be a Michaels, though, and you could use a coupon on it, I decided to give it a try … IF I could find one, that is. Apparently, each Michaels only got 2 pink ATGs to start with. If it’s popular, they’ll carry more. So I was prepared to have to go all Kung Fu Panda on someone if need be, to get 1 of the 2 pink ATG’s at my Mike’s.

I looked at one store with no luck. The hard part was not knowing where exactly TO look. SB message boarders were reporting finding it in all different places within the store – in the scrapbooking section, on an endcap, with the general adhesives, on a center island rack, up by the cash registers, etc. As usual, most Michaels’ employees had NO idea what customers were talking about when they asked after it.

Alas, I did find the pink ATG at my Michaels last weekend. It was on an endcap in the scrapbooking section with a bunch of other Scotch/3M adhesives. Yes, there were TWO! {Looking back, I should’ve bought the 2nd one and sold it on the black market for big profit. Drats!} 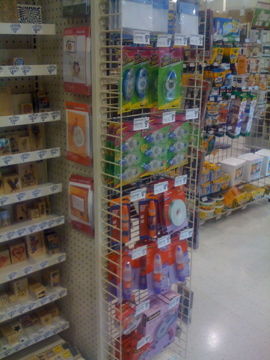 I did use my 40% off coupon which made it a mere $21 to purchase. I debated buying extra rolls of adhesive at the same time but they were $10. I decided to wait and use a future coupon to buy a refill. From what I hear, it takes quite a while to burn through a role of ATG adhesive (one of the other selling points … it’s cost effective for your adhesive budget). The only thing I’m afraid of is, in typical Michaels fashion, once they realize how popular and “coupon-worthy” ATGs and refill rolls are, they will outlaw coupons for them. Mark my words.

St. Paul, Minn. – July 22, 2010 –3M announces the new Scotch® Advanced Tape Glider in pink for the serious crafter, featuring the quality and value of Scotch, the brand on which crafters, scrapbookers, and millions of consumers around the world have come to rely.

3M is also very pleased to announce a special partnership with an extraordinary organization –Susan G. Komen for the Cure®. For every Scotch glider purchased through July of 2011, 3M will donate $1.20 to Susan G. Komen for the Cure, with a minimum donation of $25,000. The donation will help fund life-saving breast cancer research and community outreach projects. Crafters will easily spot the pink Scotch glider and packaging at their favorite supply stores.

With the touch of a finger, the new Scotch advanced tape glider from 3M applies a neat, accurate, and consistent line of adhesive for clean and professional-looking results. Applications include scrapbooking, card-making, invitations, school projects, package wrapping, and many, many more. Easy to use and refill, its uses are as unlimited as the user’s imagination.

For a limited time, the Scotch advanced tape glider comes packaged with two 108-foot-long rolls of ¼”, premium performance acid-free tape. Refills are available in two-packs of either acid-free or general purpose tape. The new larger glider holds up to 3 times more tape than traditional tape applicators, and the longer rolls mean fewer refills, resulting in greater convenience and value per foot.

In support of its launch, the Scotch glider will be prominently featured at the Craft & Hobby Association Summer Convention and Trade Show at the end of July.

See, it’s a GREAT thing to go buy a pink ATG! You’re helping a very important cause: Breast cancer research. If that’s not justification to buy a new scrapbooking tool, I don’t know what is. Besides, did you hear me the first 10 times???? IT’S PINK!!! What’re you waiting for, Missy? Get over to your craft store and buy one already … before …. today! The end of July …

Do you have either version of the ATG? Do you plan to get one? If you have a red or pink ATG, what’s the best thing about it?