I was in Mike’s last weekend and noticed that a lot ~ if not all ~ of their Halloweenie stuff was on Clearance. Cuz, people, they are makin’ room for Christmas already! There were lots of empty shelves and the Mike’s employees were busy moving and shaking thing up.

I took these photos back in late August 2010 and never did get around to posting them. I assume your shelves, like mine, will be less full of Halloween stuff at this point, but it gives you an idea of some items they might still have … 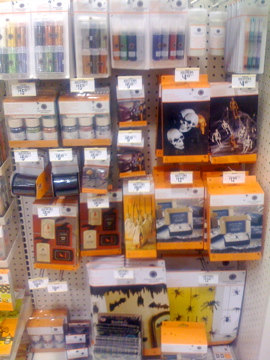 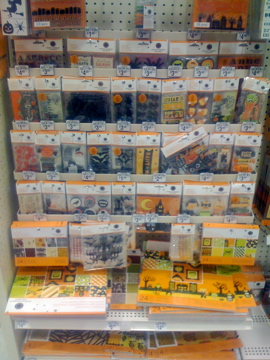 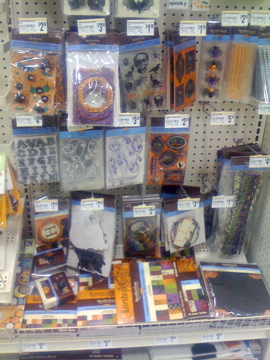 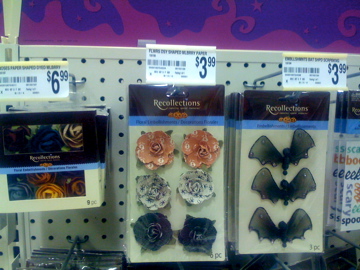 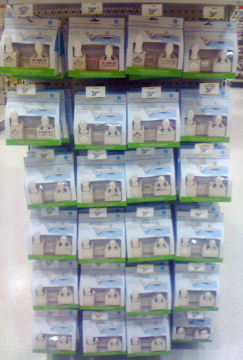 Last weekend, I got these 2 Martha Stewart “Cracks” Around the Page punches. I went in there with another of my “50% off all Martha” coupons, found these punches on the clearance rack, and proudly marched up to the cashier knowing that I could use my coupon on the more expensive edge punch … because Mike’s coupons don’t work on sale items from the ad, but are okay on Clearance items (at least they used to be; I haven’t tried it in a while).

HOWEVAH … the Mike’s clerk got me in a smackdown! She pointed out that the Martha coupon specifically says that it’s not to be used on Clearance items. Touche’, Mike’s Girl, touche’.

HERE is a cool video showing how to use this punch. Check it, homegurl!

Have you picked up any of these great Halloween deals?