I was “oot and uh-boot” Friday evening and did some fun shopping in between the grocery shopping and getting gas drudgery. Here is a report on my adventures, as far as scrappy stuff I found….

Target: Nothing. Same old stuff they’ve had for a while. Nothing on sale. Nothing to report. Oh, except I got the new CK there. 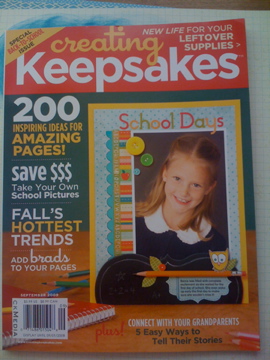 Been chillaxin’ around the house this weekend with it, and am LOVING IT! Such a great issue, chock full of layouts and techniques, as a SCRAPBOOKING magazine should be (unlike….cough, cough….SCRAPBOOKS ETC…..traitor….cough, cough)…

Walmart: Still have a lot of stuff on Clearance. The Cricut carts for $30 each were pretty tempting but I resisted. Not that flush right now. But this is what I bought there on clearance a couple weeks ago and they still have pretty much the same stuff as when I shopped then…. 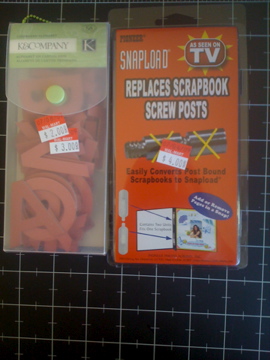 Michaels: So I had two coupons in hand: a 40% off that expired that day, and a 50% off that expires Monday (which is odd, but who am I to complain?). I cruised the aisles quite a bit trying to find something coupon worthy.

There was some new (to me, at least) bling kits, the I-Top brad maker by Imaginesce, and some metal embellishments by Making Memories. 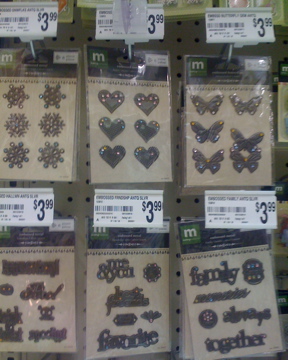 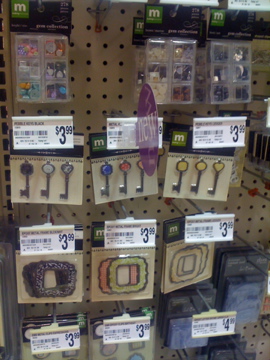 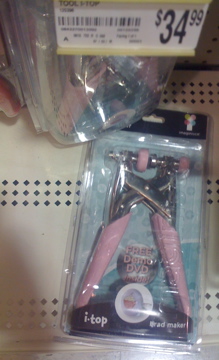 I had the metal snowflakes with bling in my hand, but put them back. Maybe another time, another coupon…

As much as I loved all these new acrylic stamps,…. 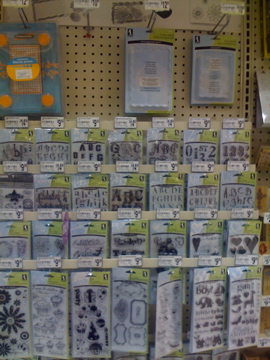 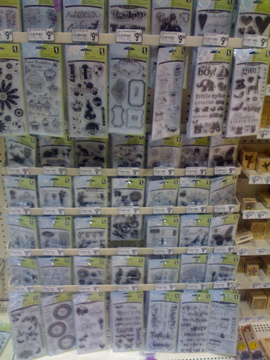 … and they weren’t on sale so I could’ve gotten a set for 1/2 off, I resisted their magnetic pull with some motivating self-talk…”Just snap some quick photos for the blog. Remain objective. You do NOT like acrylic stamps. You do not NEED acrylic stamps. They hold no meaning for you. No, Erika, not even that adorable set with the butterfly. And, no, you don’t need any more alpha stamps….the 170 sets you have at home are quite enough. Okay, you took the photos, now keep walking. No, don’t pet them. ERIKA!! Hand off the pretty stamps. Good. Now walk away. Dit! Don’t look back over your shoulder. Look! Pretty bling! Let’s go over there!” See, my friends, THAT … is how it’s done.

I found this endcap full of cute, 12×12 postbound albums by Recollections (the Michaels brand). 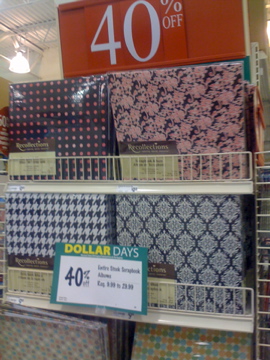 There were some really cute styles to choose from. They were jam-packed on the shelves like 20 circus clowns in a Mini Cooper. It was hard to get a good look at them all without a struggle, pulling out the first 2 or 3 in each row to see what was behind them. {I tried to peek in the sides but there were other racks blocking my access…hmph}. Many albums that I pulled out had bent corners on either the album itself or the pages (I assume, the result of beingsotightlyshelved….poor babies couldn’t breathe…). I made sure to pick out two unbent ones :) {I get doubles to use as yearly family albums because I scrap too much to get everything into one}. As you can see, the shelf stickers said $9.99 and a sign up top said 40% off. I asked myself, “Self, does that mean they are 40% off of $10, making them a mere $6 each?” And then I answered myself with, “Oh, Self, no! That would be too good to be true. Even Michaels wouldn’t run a deal THAT good!” But I, myself, was …. WRONG! Cuz they rang up at the register as 6 bucks, baby! Did my everlovin’, deal seakin’, penny pinchin’ heart good, it did.

Right inside the front door, they had the rack that usually says “Designer Scrapbooking” but it was full of Clearance items. 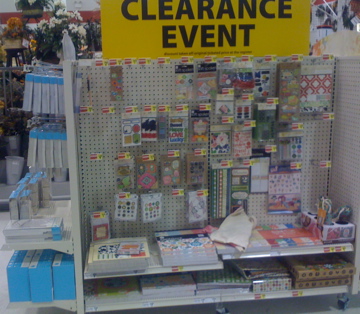 From there, I got these Making Memories “Black Tie” white pearlized letter stickers for $2 marked down from $4. For full coupon maximization, I grabbed these Martha Stewart chalk inks from Clearance (for the 50% off) and some Herma tab refills (for the 40% off). However, the register wouldn’t allow the coupon to be used on the inks because they were already on sale. I said, “I thought you just couldn’t use coupons on weekly sale items, but it’s okay if they’re Clearance or Reduced or whatever?” and she thought so too, so she read the coupon. Yep, there in the teensy weensy fine print it said something like, “Not for use on previously marked down items.” Crud. Oh well, I took the inks anyway…they were still 30% off. And the 40% off coupon worked on the Herma tabs. 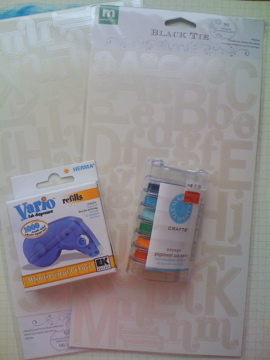 So, I got two 12×12 albums, Herma tab refills, a stack of chalk inks, and two sets of letter stickers for $30, which I could’ve paid for just one album. Happy me.

Big Lots: Happy? Not so much. When I first turned into the scrapbooking aisle, my eyes lit up because I immediately noticed that the inventory of Thickers had gotten much larger. Yippie skip! (HERE is where I talked about my bad luck with Thickers @ BL). But I was to be disappointed again. There were tons of the shapes ones, one pack of red felt and tons of the naked chipboard ones (which I already got last time), and that was it. They had the K&Co embellishment stickers that the Peas were talking about HERE, but none I had to have.

I thought some of you might be interested in these, so I took a pic for ya…. 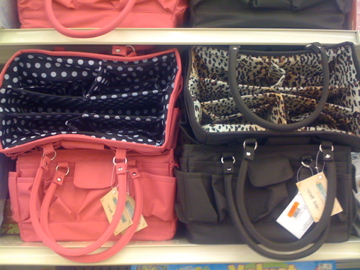 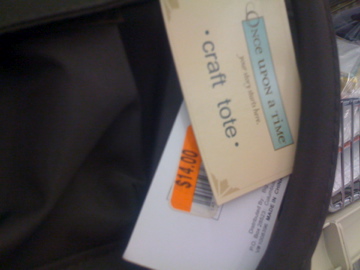 Great deal and very cute! I love the prints on the inside, don’t you?

Well, those were my latest shopping/window shopping adventures. What kinda scrappy stuff have you found lately at Target, Walmart, Michaels, and Big Lots? Would love to hear in Comments, and feel free to link to your blog if you’ve posted about ’em.