You Thought We Wouldn’t Notice

I will try my best to synopsize the LONG chain of events, but if you really want the Low Down Dirty Scoop on this, you have a lot of reading ahead of you. And I’m warning you, I’m going to say ALLEGEDLY a lot because I’m not Donna or Fossil or Unity, and I don’t know for a FACT what has happened in any of this. I’m just reading what others have written and doing my best to summarize it to the best of my understanding … ALLEGEDLY :)

Once upon a time, there was a famous scrapbook writer and designer named DONNA DOWNEY. She had a sparkling personality and creative talent. She inspired scrapbookers and won lots of fans. She made a very successful business and a nice living from these endeavors.

Donna was a sought-after crafting instructor and gave workshops, often costing a pretty penny. But that was worth it and okay with many … it was Donna Downey, after all. She had a saying that I loved, and have quoted on this blog before: “Perfect just the way you create.”

Then one day, she became the subject of a major “scrapbook scandal.” To save you from reading the 21-page 2peas THREAD {although you are certainly welcome to}, I’ll try to summarize: Donna ALLEGEDLY refused to refund class tuition to a Pea who couldn’t attend for very serious health reasons. It wasn’t until the Peas did a perfect pile-on that Donna eventually refunded the Pea’s money, but most saw it as too little, too late. The damage had been done and a boycott was launched. In the years since, many Peas have stuck to this ban and the issue occasionally comes up in the context of other scandals, so we’re all reminded of the sitch with Donna Downey.

Okay, that was the background. Now, for the latest:

Started on Sunday, January 30, 2011, check out THIS 2 peas thread on the NSBR side, which spawned THIS thread on the Scrapbooking side.

It all started with a Pea who couldn’t sleep, and while surfing the internet she found THIS. It’s a post from a blog called “You Thought We Wouldn’t Notice … but we did” The blog says, “This site is dedicated to pointing out those things that give you that feeling of ‘haven’t I seen that somewhere before?'” In other words, people post there when they feel that someone’s art or creative work has been “ripped off” by someone else.

The blog article referred to THIS post from Donna’s blog in which she posted this, on December 26, 2010:

last weekend in Peddlers Village, PA, one of my students brought this really cool Fossil bag to class (hi sandy!). it was a different shape than this but i loved the birds. while at Quakerbridge mall in NJ, we saw the whole line of fossil bags in this print and i just didn’t like the shape of any of them. i am a “big bag” kinda gal. i have journals, pens, sunglasses, etc that i have to fit in there and they were all really slim. 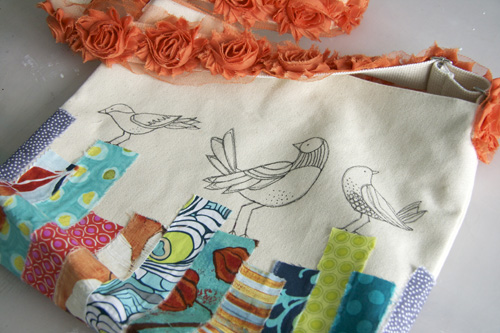 today i woke up and felt the need to make my bird purse!
i took out a bunch of fabrics and just started tearing strips and layering them around the bottom of the bag. the design is the same (or basically the same) on the front and back side of the bag.

and as for the birds i hand drew them with a sharpie pen and they make me SO FRICKIN’ HAPPY I CANT TAKE IT!

the orange flower trim, shhhh, that’s mine too…you didn’t see that either.

it is not finished by any means but i just had to share!

The comments from Donna’s readers back in December were initially super-supportive … but the most recent ones have taken quite a turn. The great majority of Peas who’ve posted to the thread that broke this story (linked above) are quite unhappy with Ms. Downey, to put it mildly, and some have posted to her blog, the You Thought We Wouldn’t Notice blog, and have attempted contact with UNITY STAMP COMPANY via their Facebook page, and with Fossil, the seller of the purse that Downey was so “inspired” by.

Not only did Donna ALLEGEDLY make a purse for her own use, inspired by the Fossil purse with a nearly identical design, but she ALLEGEDLY created a stamp for Unity using one of the same bird designs, assumedly passing it off as her own design (the thought being that she would’ve had to sign an agreement/contract with Unity stating that the stamp design was original and not taken/copied/traced from another source). On top of that, she gave an “Artful Bag” class at CHA this past Saturday using said stamp …

Donna’s new product line is so versatile and colorful. Join her as she shows you some new techniques using her brand new canvas bag, floral ribbon trims, iron ons, and lots of gorgeous fabrics.

However, although Unity appears to have ALLEGEDLY planned to release the bird stamp – as evidenced by it’s appearance on their website for pre-order (now missing), inclusion in their CHA catalog (alas, distributed with a sticker over the bird stamp image saying “not available”), and the inclusion of the stamp in the ad for Donna’s Artful Bag class at CHA – apparently, plans for Unity to release the bird stamp were scrapped (pardon the pun) at some point, which leads to even more questions … like what did Unity know and when did they know it?

Unity has responded on their FB page with this:

Note to all…this was never put into production. We have no intention of it being introduced into the Unity product line. thanks for bringing it to our attention!

In the 2peas thread on the Scrapbook side, this was just posted by AJ, the Unity stamps Design Team Coordinator:

Hi! Unity has no intention of producing this now, ever, or making it a part of the Unity line.

So, as best as I can piece things together, here is what is being assumed to have happened [[[[[ ALLEGEDLY ]]]]]

1. Donna Downey saw a Fossil bag and was inspired by it.
2. She made her own version of the purse, with fabric-strip buildings and bird designs that are a very close match to the original purse.
{Up to this point, most people are okay with it … she was inspired by a purse she saw, she made her own copy of it, and shared it on her blog for inspiration}.
3. Her fans loved the bag and many said stamps NEEDED to be made from the bird images.
4. Donna then worked with Unity on a stamp that was to be a CHA-W 2011 offering, included in their catalog.
5. Donna taught a class this past Saturday at CHA which was advertised using a picture of her Fossil-inspired bird purse, and what is thought to be a mock-up of the Unity stamp … which apparently has not and/or will not be manufactured after all.

I’m blogging this at 1:45 on Monday morning, the day after the 2peas thread started. According to their website, CHA runs from January 29-February 1, so we’re assuming that people like Donna, those at Unity, etc. are a bit preoccupied right now. As of now, Donna’s blog and her TWITTER account are devoid of any mention of this “scandal” and her “smoking gun” blog post with all the negative comments has not yet been removed (do we predict that it will be?). The 2 peas thread on NSBR is now at 8 pages and still growing.

As you can see from my post back HERE, I’ve tried to stay out of the fray so far with Donna Downey scandals. If you do a Search on my blog for “Donna Downey,” you’ll see that I’ve never badmouthed her. But it’s near impossible to keep my opinion to myself on this one … partly because it’s not the first time she’s done something I don’t understand.

At this point, I’m not going to say much. I don’t feel like all the facts are in. I feel like we’re supposing and assuming a lot. I hate to form opinions this early in the game. I try to be fair and discerning about this kind of thing.

I do pray she has a good explanation for what has happened, and we can all eat our words. I like to assume that people ~ especially those I look to for inspiration in the scrapbooking world ~ are honest and true. But if what we “think” happened ends up being what actually happened? I’ll be very, very disappointed …

How about you … care to weigh in?