It’s been a while since I did my shopping rounds down in the Big City, but I had to hit Costco yesterday so there was my excuse, LOL!

First we drove the 45 minutes to my nearest LSS, which I was SO looking forward to. I hadn’t been in months and was going to treat myself to a tiny shopping spree. I also wanted to see what their latest and greatest, most popular items are because ~ other than Cricuts ~ I haven’t been hearing much chatter on the MB’s these days on what the hot item is that everyone wants. However, we were greeted with a note on the door saying they were closed through 12/27 due to a family emergency. Shizzle! Major disappointment. I was so pathetic, I stood there with my nose pressed to the window trying to see the What’s New section right up front, and it looked like mostly the K&Co. Christmas stuff that I had already seen most of at Michaels. The Bazzill racks were so close, I could almost reach out and touch all that yumminess…except for that darn locked door in the way! To get things back in perspective, I took the kids to a park in that town I’d been wanting to check out. The family of an old friend of mine that passed away last year put a beautiful memorial to him there, with a stone bench, a tree, and a plaque that told of his life. He was an amazing man and I’m glad I got to be there, sit on the bench, and say a little prayer to him. The kids had a blast playing and got out some energy to prepare for our long shopping adventures ahead, LOL!

Next, we went to the Big City Michaels which is better than the one I usually go to. Yes, they were packed (did you see this POST about how the craft industry is actually doing better during the recession?). As I had heard on 2peas, they had a ton of their PP on clearance but I didn’t see anything I wanted, but doesn’t “major clearance on patterned paper” = “new patterned paper is coming”?? Yeah! I ended up with a white Staz On ink pad to get with my 50% off coupon (score!), and a paper doll kit for one of my nieces for 25% off. I was disappointed again…I figured this Mike’s would have the BG Sugared and Archaic that my regular Mike’s hasn’t carried, but no luck. I kept grabbing the Bazzill Christmas pack to use my coupon on but then put it back…You know how much I {heart} Bazzill but my 3 vertical paper holders just got full to the brim with Bazzill and Prism, so I really need to use some up before I buy more (did I just say that?). I don’t have a ton of money right now anyway, so it was best to just get the ink pad for less money. I hate being responsible and, as you will see, that was nothing compared to the willpower challenge I would face later. PS: They give you a 50% off coupon with your receipt.

Next, I checked the Dollar Store but they had nada. Back in the Day, they would often have something good ~ remember the fake Thickers, and the fake MME Soft Spokens? Lately, nothing, but I can’t seem to give up checking every so often. Next door to them is Tuesday Morning, which is so hit and miss, sometimes I feel like, “Why bother?” But this time was definitely a hit. They had tons of 12×12 postbound albums; I can’t remember the brand name but they all had themes on the front like a Santa, sports, or whatevs. There were letter sticker packs and metal photo corner packs. Then the light shone down from the heavens and illuminated not just a huge pack of KI Memories 12×12 papers, but a huge-r pack of Heidi Swapp 12×12 papers. The KI Memories pack, similar to the way American Crafts packages their paper packs, had the bottom right corner open so you could flip through and glimpse all of the papers. There was a nice mixture of patterns and even some with rounded corners. But I had to pass on it, because some of the papers I already have from the LAST KI Memories stack I bought. But if you love KI, the price was great so go check it out. Now, resisting the HS stack was much harder because I hardly have any of her papers. Samples of all the papers were shown on the back – there were stripes, solids, plaids, stars, and some of those cool travel/map papers she does. I carried that thing around like a newborn baby for quite a while but, alas, left the store without it. I need more PP like I need a hole in the head. My resolution for 2009, now that I have my scrap area (mostly) organized, is to START SCRAPPING more! Use up some of what I have so I can stop passing up sweet Heidi Swapp paper deals. Anwhizzle, there were also chipboard alpha sets and some cute ribbon, but those weren’t worth standing in the long lines for so I put them back. I’m sorry I don’t remember the exact prices on the KI and HS pack but I want to say $8.99 and $9.99 and it was a ton of paper.

Finally, to Costco where I saw the famous huge paper pack they’ve been talking about at 2peas. It comes in it’s own accordian holder and the papers are thick, good quality. There’s even an instant rebate right now, so you should definitely go check it out if you have a chance. If I remember right, it’s normally $29 with a $10 rebate making it only $19. 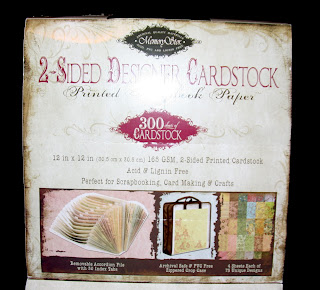 They had another one of those huge “no name brand” kits with all kinds of paper, embellies, and an 8×8 album. You could do a cool album project with that with your eyes closed. No choices or shopping, it’s all right there for ya’. They had the 2-pack of 12×12 albums but they were, like, ribbed silk (?) texture which I don’t care for. With my kids, they’d get dirty and ripped. I like the faux leather ones better and hope they come back soon. I also wish my Costco would sell the page protectors that go with these albums (brand is Memory Stor). They’re great quality and I’ve ordered them a couple times but I prefer instant gratification. Besides, if I buy it in a store I can sneak it inside whereas anything that is shipped, I have to explain/justify to DH and who wants to waste time doing that? (TOTALLY kidding, Honey! I show you EVerything I buy…yep, I do). And remember those cute gift tags at Costco that were all the rage last year? (CKMB girls, say heyyyyyyy…) They had a new set; still perfect for embellishing Christmas cards. Again, I left empty handed.

So, an anticlimactic day for me, as the thing I was looking most forward to was the LSS shopping. And even though I couldn’t afford to buy much, I sure enjoy the scrapbook window shopping, don’t you?

Speaking of Mike’s, my Partner in Shopping Crime, Abby, told me this today:

“Mike’s has all the Basic Grey Sugared and Archaic (except the 12×12 Archaic paper) for 40% off on clearance! Oh, and the Falala MM line is on sale, well, most of it is. I got the rubon roller, some BG sugared fibers and some falala canvas letters.” My stupid Mike’s (both of them) don’t have any of this stuff but yours might, so get sum summa’ that clearance goodness now! You have a 50% off coupon you need to use anyway, so go!

Is the Recession GOOD for Scrapbooking? Please Meet Landry!